Yesterday, just for fun, I added an emoji (as a local emoji) to our mastodon instance, kind of look like a verification icon. Only to show the power of federation and Free Software to the new users of Mastodon. Many other users started using the same. But, most newbies to Mastodon got confused with the same 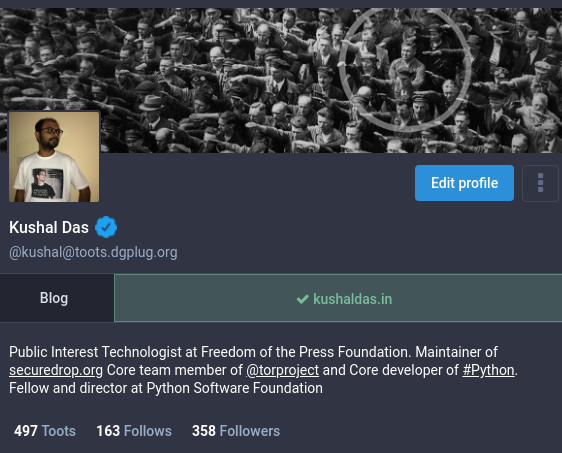 If you see the above screenshot, I just added :verified: after my name in my profile, and that shows the icon. That is not any formal verification. The https://msdtn.social instance also has a similar emoji, but the big https://mastodon.social does not have the same.

Then how to verify someone on Mastodon?

The best way is via their website or blog. If you click to edit your profile, you will find the option to add a few profile metadata, in those sites, you can verify that you own or have edit access of those sites.

Thus, my blog comes with a green tick on my profile image. Here is to the link verification documentation from the website.

As I have mentioned in the dgplug summer training page, focusing on the Free Software movement is a big part of this year's training program. A few weeks back there was a tweet from @gnome about travel ban, and many could not figure out why Gnome was writing about this topic. Amongst the many proper replies, Miguel de Icaza’s reply was to the point. This incident made Anwesha and me stop and think; and then made us rethink, about how we wanted to conduct the sessions on the Free Software movement and Software Licensing.

I was born in the beginning of the 80s and Anwesha even later. Our introduction to the movement was from the stories we heard (from many people); from Levy’s famous book, Hackers: Heroes of the Computer Revolution and the seminal Free as in Freedom.

My introduction to the FSF came through ilug-calcutta, and from Sayamindu. Later, at foss.in 2005, I made another friend (for life), Praveen A (he is from the same batch). And even later through out various conferences, I was introduced to other members of FSF India. In 2007, I was part of the 4th GPLv3 meet organizing team in Bangalore. That was my introduction to RMS, and his personality (I will write a blog post later about various incidents from that conference). That had a big impact on me.

Coming back to the story of the tweet, we also saw similar ignorance from newcomers, as they never got a chance to learn about the past, nor did get to meet the various people involved (distance and time). So, Anwesha and I, tried to write a brief history, including the hacker ethic, and beginning of the Free Software movement. A lot of stories mentioned in the article are from the books mentioned above. At the very end, I have written about how the different software we use everyday came about initially. I took the help of various FSF bulletins for the same.

This Monday I took a session on the same topic in the #dgplug IRC channel. When I made mention of the GNU C Library and the time Ronald McGrath started it, Siddhesh called attention to an announcement he (Ronald) made a few days ago (about stepping down from maintainership of that same GNU Library). I also pointed that Siddhesh is now one of the maintainer of Glibc. That gave the students a sense of impact and immediacy; a feeling of involvement and ownership.

Today evening from 13:30 UTC, Anwesha took a session on Software Licenses 101 in the #dgplug channel on Freenode. There will be more follow up sessions in the coming days.

Link to the article once again