A couple of days ago I released Johnnycanencrypt v0.11.0. It is a Python module for OpenPGP written in Rust.

The most interesting update is for Linux users, now we have pre-built wheels for Python 3.8, 3.9, 3.10 & 3.11. You can just install that via python3 -m pip install johnnycanencrypt. You can also do the same on Intel Macs (for Python 3.10 and 3.11). But, I failed to build for Apple Silicon systems. I will work on it in the coming weeks.

To know the Yubikey card version we can call get_card_version function written in Rust.

Or directly use the function get_card_touch_policies to get a list of policies for the current Yubikey.

Then we now can also set the touch policies for a given Yubikey. For example:

It will be nice to see what people will build on top this. I also missed to blog about the v0.10.0 release. You should that changelog too.

3 days ago I released Johnnycanencrypt 0.9.0. Here is the changelog:

The first biggest change is related to build system, now we are using setuptools-rust to build. This change happened as dkg is working towards packaging the module for Debian.

The other big change is about certifying someone's key. We can use the primary key (either on disk or on Yubikey) to do the signing.

In the above example I am signing two user ids of the key k using my_key with a PositiveCertification.

Today I released Johnnycanencrypt 0.7.0. It has breaking change of some function names.

But, the major work done are in few different places:

In the Github release page you can find an OpenPGP signature, which you can use to verify the release. You can also verify via sigstore.

I took 8 months for this release, now time to write some tools to use it in more places :)

This week I released the first version of Tumpa on Mac. Though the actual changes required for building the Mac app and dmg file were small, but I had to reap apart those few remaining hairs on my head to get it working on any other Mac (than the building box). It was the classic case of Works on my laptop.

Tumpa is a Python application which uses PySide2 and also Johnnycanencrypt which is written in Rust.

I tried both briefcase tool and manual calling to codesign and create-dmg tools to create the tumpa.app and the tumpa-0.1.3.dmg.

After creating the dmg file, I had to submit it for notarisation to Apple, following:

This worked successfully, after a few minutes I can see that the job passed. So, I can then staple the ticket on the dmg file.

I can install from the file, and run the application, sounds great.

But, whenever someone else tried to run the application after installing from dmg, it showed the following. 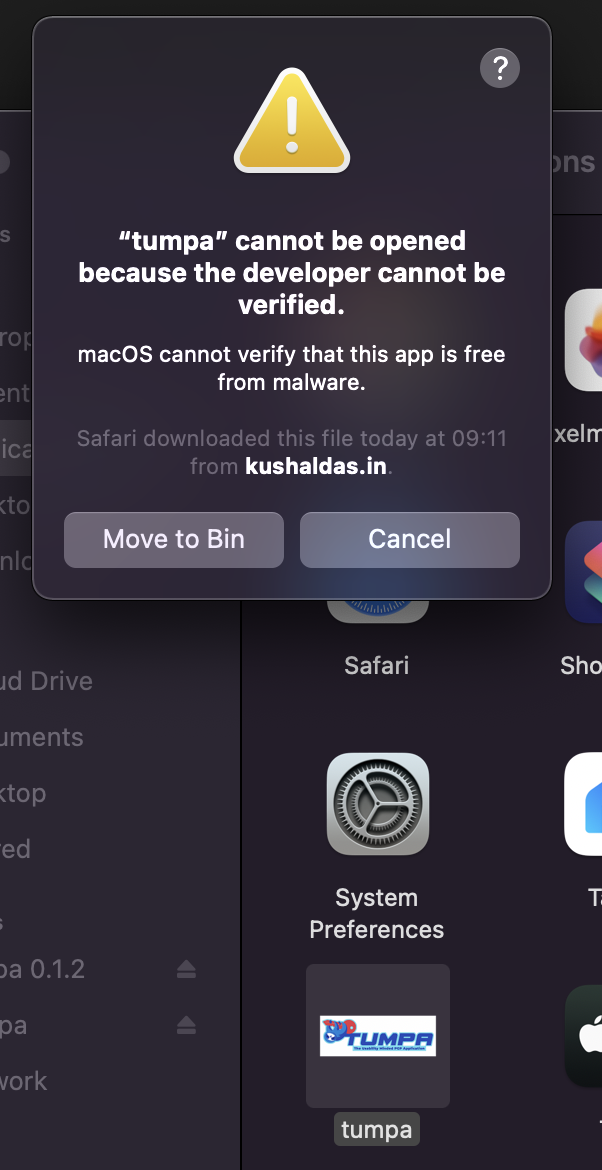 It took me over 4 hours to keep trying all possible combinations, and finally I had to pass --options=runtime,library to the codesign tool, and that did the trick. Not being able to figure out how to get more logs on Mac was making my life difficult.

I had to patch briefcase to make sure I can keep using it (also created the upstream issue).

You can see my build script, which is based on input from Micah.

I want to thank all of my new friends inside of SUNET who were excellent helping hands to test the multiple builds of Tumpa. Later many folks from IRC also jumped in to help to test the tool.

I am happy to announce the release of Tumpa (The Usability Minded PGP Application) for Mac. This release contains the old UI (and the UI bugs), but creates RSA4096 keys by default. Right now Tumpa will allow the following:

The keys are stored at ~/.tumpa/ directory, you can back it up in an encrypted USB drive.

Download & install from the dmg in the standard drag & drop style. If you are using one of the new M1 box, remember to click on “Open in Rosetta” for the application. 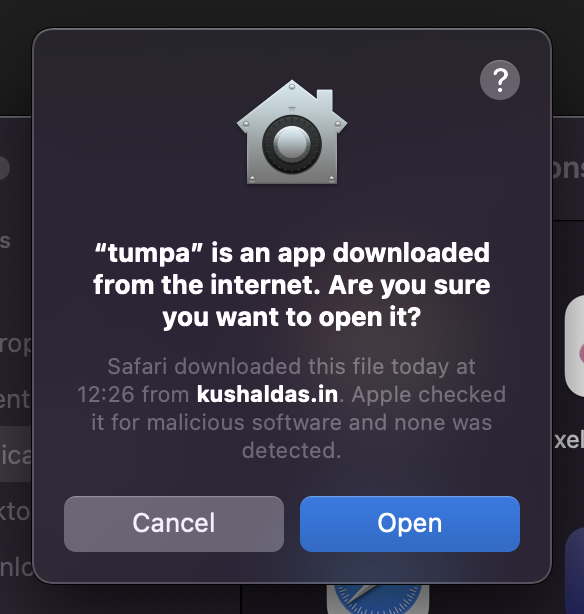 Here is a GIF recorded on Linux, the functions are same in Mac.

Saptak (my amazing comaintainer) is working on a new website. He is also leading the development of the future UI, based on usability reports. We already saw a few UI issues on Mac (specially while generating a new key), those will be fixed in a future release.

Feel free to open issues as you find, find us in #tumpa channel on Libera.chat IRC network.

A few days ago I released 0.6.0 of Johnnycanencrypt. It is a Python module written in Rust for OpenPGP using the amazing sequoia-pgp library. It allows you to access/use Yubikeys (without gpg-agent) directly from your code.

This release took almost an year. Though most of the work was done before, but I was not in a state to do a release.

I also released a new version of Tumpa which uses this. An updated package for Debian 11.

Last week I wrote about how you can generate ssh keys on your Yubikeys and use them. There is another way of keeping your ssh keys secure, that is using your already existing OpenPGP key (along with authentication subkey) on a Yubikey and use it for ssh.

In this post I am not going to explain the steps on how to move your key to a Yubikey, but only the steps required to start using it for ssh access. Feel free to have a look at Tumpa if you want an easy way to upload keys to your card.

First we have to add gpg-agent.conf file with correct configuration. Remember to use a different pinentry program if you are on Mac or KDE.

At this moment your public key (for ssh usage) is at ~/.ssh/id_rsa_yubikey.pub file. You can use it in the ~/.ssh/authorized_keys file on the servers as required.

We can then restart the gpg-agent using the following command and then also verify that the card is attached and gpg-agent can find it.

We should also enable touch policy on the card for authentication operation. This means every time you will try to ssh using the Yubikey, you will have to touch the interface (it will be flashing the light till you touch it).

If you still have servers where you have only the old key, ssh client will be smart enough to ask you the passphrase for those keys.

Generating OpenPGP keys in an offline air-gapped system and then moving them into a smart card is always a difficult task for me. To remember the steps and command-line options of gpg2 correctly and then following them in the same order is difficult, and I had trouble enough number of times in doing so when I think about someone who is not into the command line that much, how difficult these steps are for them.

While having a chat with Saptak a few weeks ago, we came up with the idea of writing a small desktop tool to help. I started adding more features into my Johnnycanencrypt for the same. The OpenPGP operations are possible due to the amazing Sequoia project.

The work on the main application started during the holiday break, and today I am happy to release 0.1.0 version of Tumpa to make specific OpenPGP operations simple to use. It uses Johnnycanencrypt inside, and does not depend on the gpg.

Here is a small demo of the application running in a Tails (VM) environment. I am creating a new OpenPGP key with encryption and signing subkeys, and then putting them into a Yubikey. We are also setting the card holder's name via our tool.

We can also reset any Yubikey with just a click.

You can download the Debian Buster package for Tails from the release page from Github. You can run from the source in Mac or Fedora too. But, if you are doing any real key generation, then you should try to do it in an air-gapped system.

You can install the package as dpkg -i ./tumpa_0.1.0+buster+nmu1_all.deb inside of Tails.

What are the current available features?

A lot of work :) This is just the beginning. There are a ton of features we planned, and we will slowly add those. The UI also requires a lot of work and touch from a real UX person.

The default application will be very simple to use, and we will also have many advanced features, say changing subkey expiration dates, creating new subkeys, etc. for the advanced users.

We are also conducting user interviews (which takes around 20 minutes of time). If you have some time to spare to talk to us and provide feedback, please feel free to ping us via Twitter/mastodon/IRC.

We are available on #tumpa channel on Freenode. Come over and say hi :)

There are a lot of people I should thank for this release. Here is a quick list at random. Maybe I miss many names here, but you know that we could not do this without your help and guidance.

Last night I released 0.4.0 of johnnycanencrypt module for OpenPGP in Python. This release has one update in the creating new key API. Now, we can pass one single UID as a string, or multiple in a list, or even pass None to the key creation method. This means we can have User ID-less certificates, which sequoia-pgp allows.

I also managed to fix the bug so that users can use pip to install the latest release from https://pypi.org.

You will need the rust toolchain, I generally install from https://rustup.rs.

Remember to upgrade your pip version inside of the virtual environment if you are in Buster.

Now, you can import the module inside of your virtual environment :)

Note: In the future, I may change the name of the module to something more meaningful :)

Using OpenPGP from Python is a pain. There are various documentation/notes on the Internet explaining why, including the famous one from isis agora lovecraft where they explained why they changed the module name to pretty_bad_protocol.

sequoia-pgp is a Rust project to do OpenPGP from scratch in Rust, and as library first approach. You can see the status page to see how much work is already done.

Using this and Pyo3 project I started writing an experimental Python module for OpenPGP called Johnny Can Encrypt.

The readme of the project page has build instruction, and more details about available API calls. We can create new keypair (RSA4096). We can encrypt/decrypt bytes and files. We can also sign/verify bytes/files. The code does not have much checks for error handling, this is super early stage.

You will need nettle (on Fedora) and libnettle on Debian (and related development packages) to build it successfully.

The wheels are linked against system provided nettle library. And every distribution has a different version. Means even if I am building a python3.7 wheel on Debian, it will not work on Fedora. I wish to find a better solution to this in the coming days.

As I said earlier in this post, this is just starting of this project. It will take time to mature for production use. And because of Sequoia, we will have better defaults of cipher/hash options.