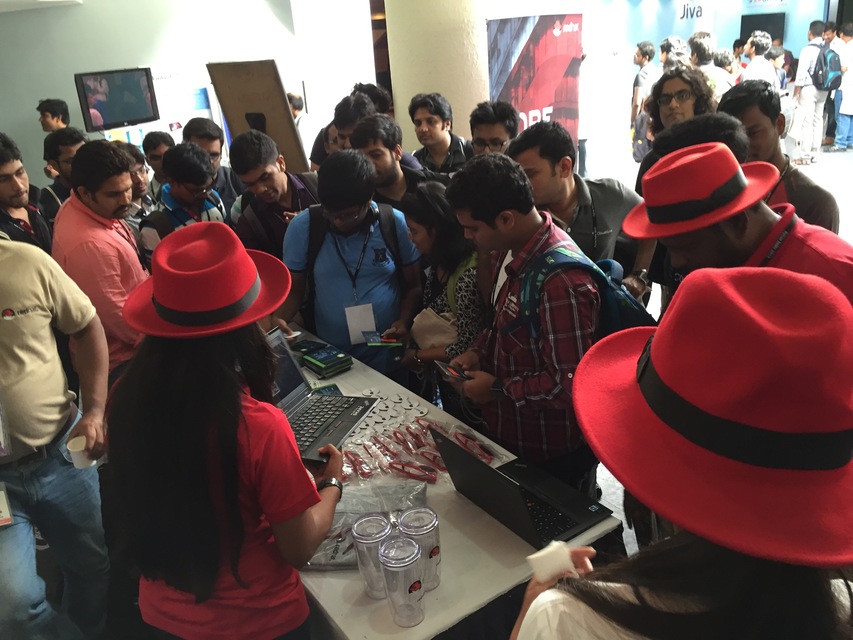 Day one is the first day of main event. I was late to wake up, but somehow managed to reach the venue around 8:30am. Had a quick breakfast, and then moved into the Red Hat booth. Sankarshan, Alfred, Soni were already there. I don't know the exact reason, but the booth managed to grab the attention of all the people in the venue. It was over crowded :) While the students were much more interested in stickers, and other goodies, many came forward to ask about internship options, and future job opportunities. Alfred did an excellent job in explaining the details to the participants. The crowd was in booth even though the keynote of day one had started. I missed most of keynote as many people kept coming in the booth, and they had various questions. 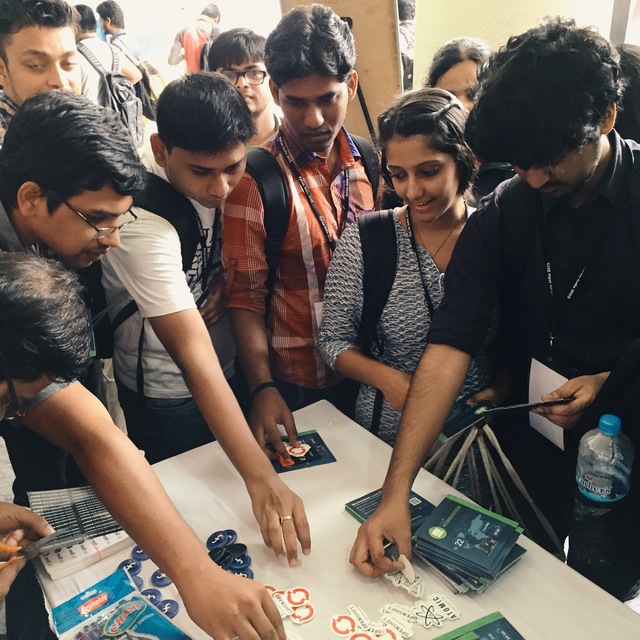 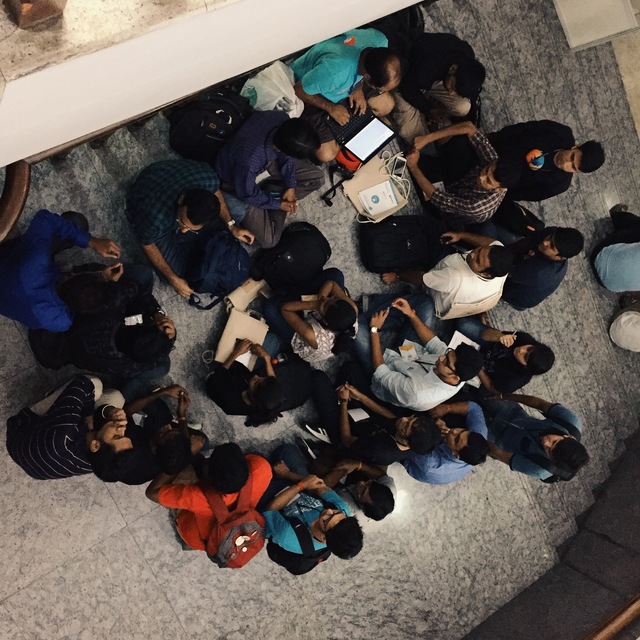 At 11:30AM, we had our annual Dgplug meetup on the staircase of the venue. It is already known as "dgplug staircase meeting".We are a virtual group for the most part of the year, but PyCon is the time when we try to meet and discuss various things face to face. Though this year many new members were busy volunteering, so they missed the meeting. We mostly discussed about the summer training, what went wrong, how can we improve etc. Here are two tweets about the same from others. 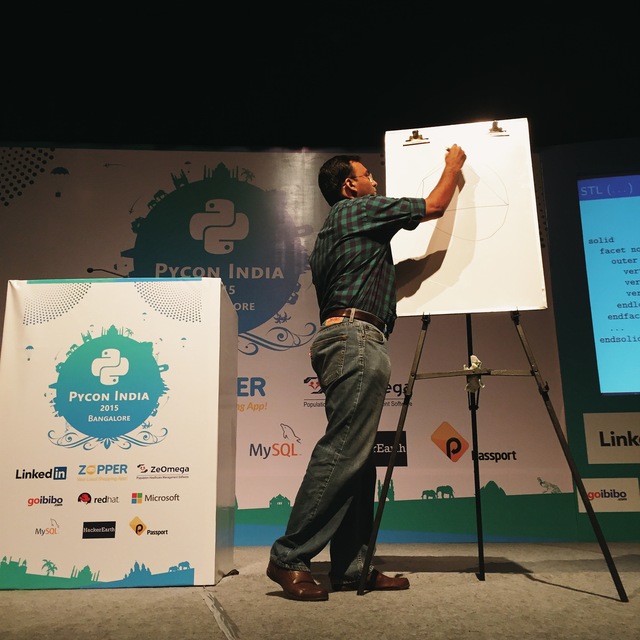 I had only one talk in my mind (other than the keynotes) which I wanted to attend. It was "Pretty printing in Python" by Shakthi Kannan, a talk about a 3D printer made from the parts available in India, and his experiments with it in both software, hardware level. It was an excellent talk.

During lunch time Anwesha and Py (my daughter) came in. This was Py's first conference. She really enjoyed it, happily roamed around with Sankarshan, and Chandan for a long time. Here is a family photo in the Red Hat booth. 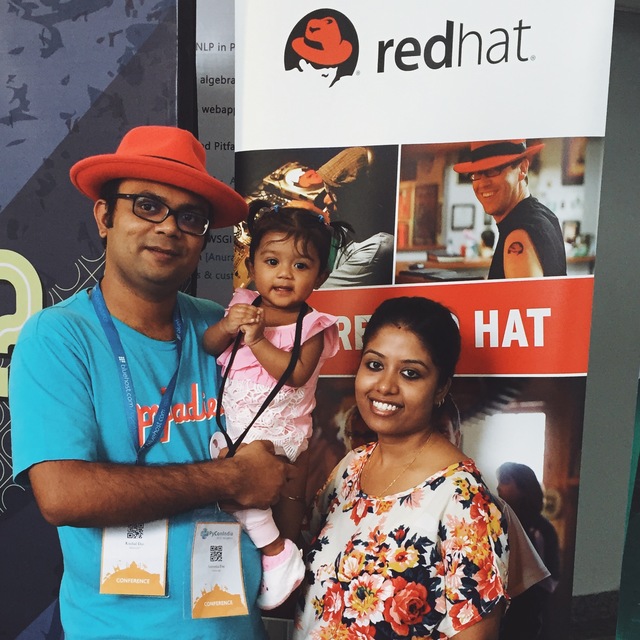 Rest of the second half I spent mostly talking with the people in and around the booth. "What do you think about working in Red Hat and upstream projects? What is the difference you feel than working for any other big names?" this question led to an interesting discussion with few SymPy developers. I hope I managed to explain my viewpoints to them properly. That answer anyway should get it's own blog post :) 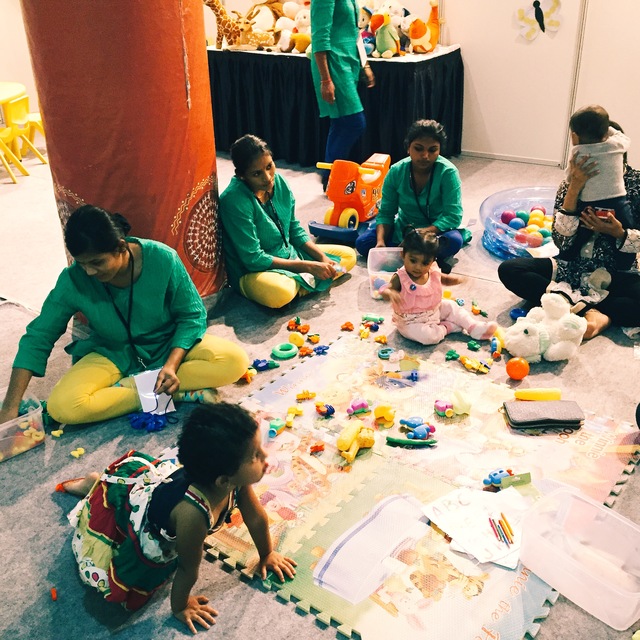 This year we also had a childcare facility in the event, and it was amazing. So many kids were inside through out the both days of the event. The parents were extremely happy about the facility. Thank you organisers for making this available to the participants with kids.