Few months back Praveen called to tell me about the new event he is organizing along with FOSSASIA, Science Hack Day, India. I never even registered for the event as Praveen told me that he just added mine + Anwesha's name there. Sadly as Py was sick for the last few weeks, Anwesha could not join us in the event. On 20th Hong Phuc came down to Pune, in the evening we had the PyLadies meetup in the Red Hat office.

On 21st early morning we started our journey. Sayan, Praveen Kumar, and Pooja joined us in my car. This was my longest driving till date (bought the car around a year back). As everyone suggested, the road in Karnataka was smooth. I am now waiting for my next chance to drive on that road. After reaching Belgaum we decided to follow Google maps, which turned out to be a very bad decision. As the maps took us to a dead end with a blue gate. Later we found many localities also followed Google maps, and reached the same dead end. 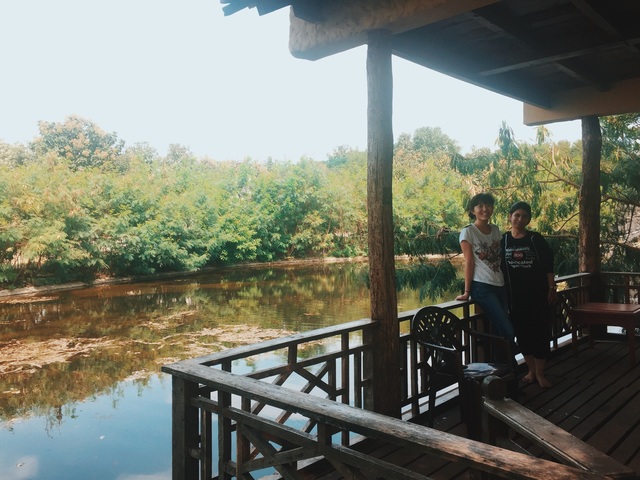 The location of the event was Sankalp Bhumi, a very well maintained resort, full with greenery, and nature. We stayed in the room just beside the lake. Later at night Saptak joined us. Siddesh, Nisha + Ira also reached later in the evening. 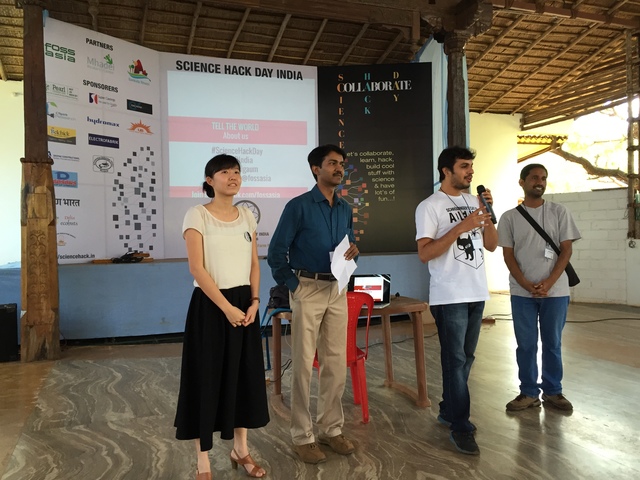 We had a quick inauguration event, all mentors talked about the project they will be working on, and then we moved towards the area for us. The main hall was slowly filled with school kids who had a build your own solar light workshop (lead by Jithin). Pooja also joined the workshop to help the kids with soldering. 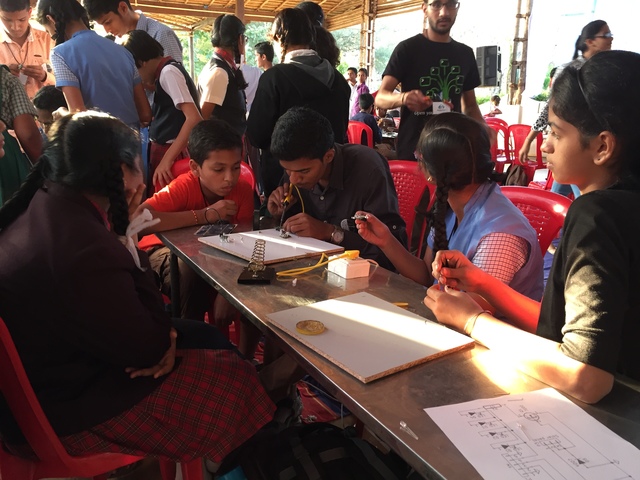 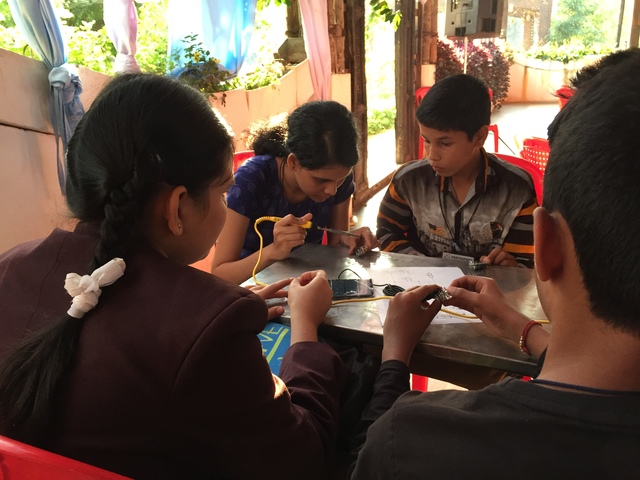 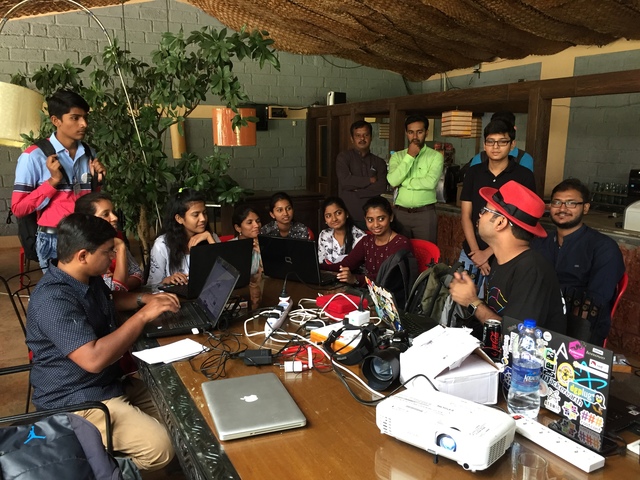 I managed to grab the largest table in the hack area. Around 9 people joined me, among them we had college students, college professors, and someone came in saying she is from different background than computers. I asked her to try this Python thing, and by the end of the day she was also totally hooked into learning. I later found her daughter was also participating in the kids section. Before lunch we went through the basics of Python as a programming language. All of the participants had Windows laptops, so it was fun to learn various small things about Windows. But we managed to get going well.

Later we started working on MicroPython. We went ahead step by step, first turn on LED, later to DHT11 sensors for temperature+humidity measurements. By late afternoon all of us managed to write code to read the measurements from the sensors. I had some trouble with the old firmware I was using, but using the latest nightly firmware helped to fix the issue related to MQTT. I kept one of the board running for the whole night, Sayan wrote the client to gather the information from the Mosquitto server. 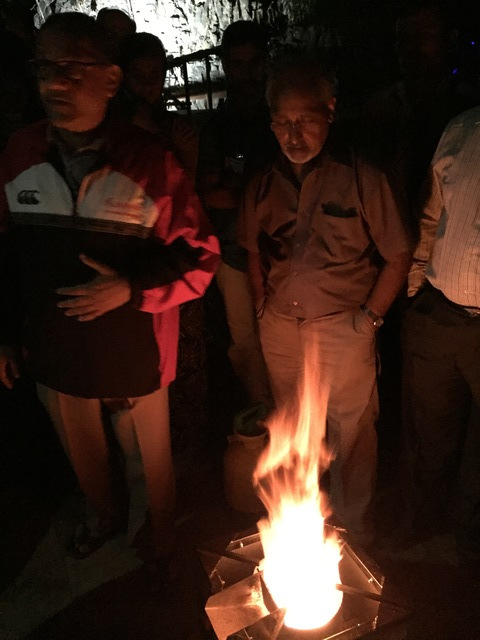 In the evening we also had lighting talks, I gave a talk there about dgplug summer training. The last talk in the evening was from Prof. Pravu, and during that talk I saw someone started a powerful gas stove outside the hut. I was then totally surprised to learn that the fire was not from gas, but using water and some innovative design his team managed to make a small stove which is having 35% efficiency of any biomass, the fire was blue, and no smoke. This was super cool.

After dinner, there was a special live show of laser lights+sound work done by Praveen. Teachers are important part of our lives. When we see someone like Praveen, who is taking the learning experience to another level while being in one of the small town in India, that gives a lot of pride to us. Btw, if you are wondering, he uses Python for most of his experiments :) 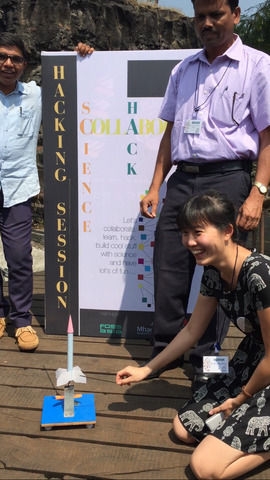 I managed to move to the hack area early morning, and kept the setup ready. My team joined me after breakfast. They decided to keep one of the boards under the Sun beside the lake, and see the difference of temperature between two devices. I also met two high school teachers from a village near Maharashtra/Karnataka border. They invited us for more workshops in their school. They also brought a few rockets, which we launched from the venue :) 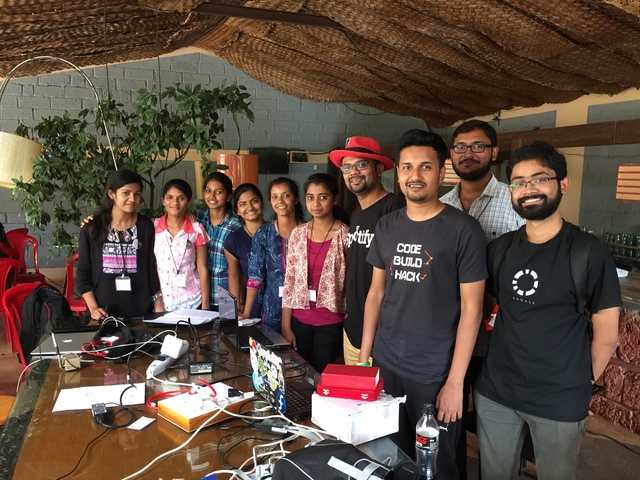 During afternoon Sayan, and Saptak worked on the web-frontend for our application, the following image shows the temperature, and humidity values from last night. The humidity during night was 70%, but during day it was around 30%. Temperature stayed between 20-30C. 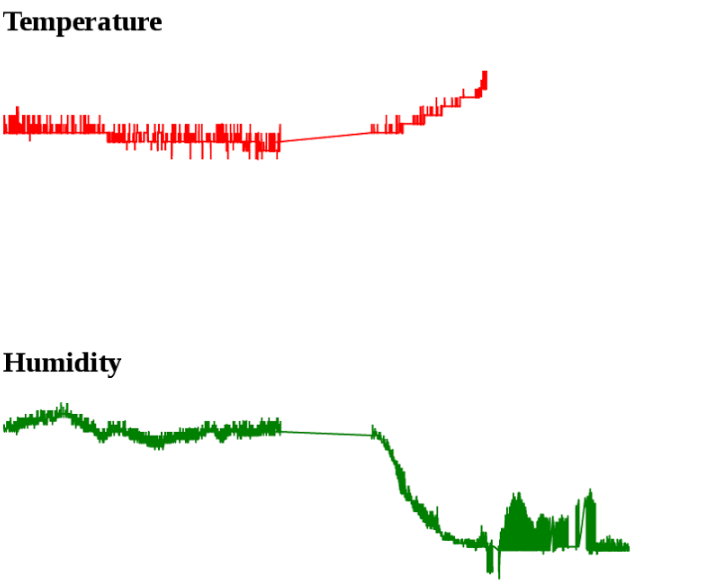 Beside our table Nisha was working on her Cookie project. Near the dinning area, Arun, and his group created an amazing map of the resort in the ground using various organic materials available in the location. That project own the best science hack of the event. You can find more about various other details in the etherpad.

The impact of the event

We saw school kids crying as they don't want to go back from the event. Every participant was full with energy. We had people working with ideas on all kinds things, and they came in from all different background. Siddhesh mentioned this event as the best event in India he has even been to. Begalum as a city joined in to make this event a successful one, we found local businesses supporting by sponsoring, local news papers covered the event. The owner of the venue also helped in various ways. By the end of the day 2, everyone of us were asking about when can we get back for next year's event. I should specially thank the organising team (Hitesh, Rahul, and all of the volunteers) to make this event such a success. I also want to thank Hong Phuc Dang and FOSSASIA for all the help.