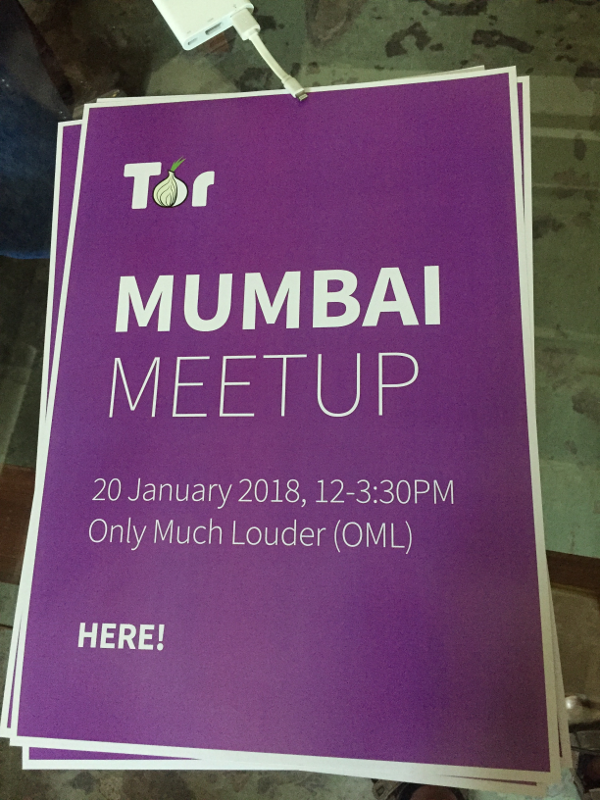 On 20th January, we had a Tor meetup in Mumbai. Hasgeek organized the event, with OML providing the meeting space. I noticed the announcement over Twitter, and made sure that I registered for the event. Two contributors from the core team, Sukhbir Singh and Antonela Debiasi, were present at the event.

Bhavin joined me on the trip. We started early in the morning to make sure that we skip all the traffic, and reach Mumbai with enough time on hand. The venue was surrounded by many excellent food places, which was really helpful.

There were around 15 participants. Folks came from different cities. We started a small round of introductions, and both of the core contributors explained how they contribute to different parts of the project. Mentioning names (of the participants) were voluntary, and it was a no photograph event. Harish Pillai also joined us in the meetup.

Antonela described the work, the Tor UX team is doing. Only 2-3 days ago, I’d heard about their work in a discussion with Simply Secure. Antonela explained how they are doing user testing, and later, many participated in the same. We should also do similar kind of user testing in every conference/meetup.

We also tested the Tor network speed. Feel free to run the same test in your system using this link.

Next, Sukhbir gave a detailed talk on the Tor project. This was filled with many interesting facts and how-to(s). Discussions ranged from the Tor Browser itself to other parts of the Tor ecosystem. He also mentioned lot of dos/don’ts while using Tor. While talking about Tor Exit relays in India, Sukhbir mentioned that he never met any of the Exit relay operators in India before.

In the later half of the meetup, I demoed the SecureDrop project. We discussed about how the Freedom of the Press Foundation is helping journalists and whistleblowers worldwide. How to leak securely? was the next topic of discussion. Sukhbir had already mentioned most of the points. I made sure to repeat and refer back to those. I have a separate blog post on the topic. The discussion then moved to the Indian press and why we don’t have any SecureDrop instances running in India. People talked about their concerns and the current situation related to privacy in India.

In the end, we all moved to the microbrewery next door, and discussions continued.

While coming back, we were stuck in Mumbai traffic for a few hours, and reached home late.

Antonela has also shared her views about the meetup in the Tor Blog.