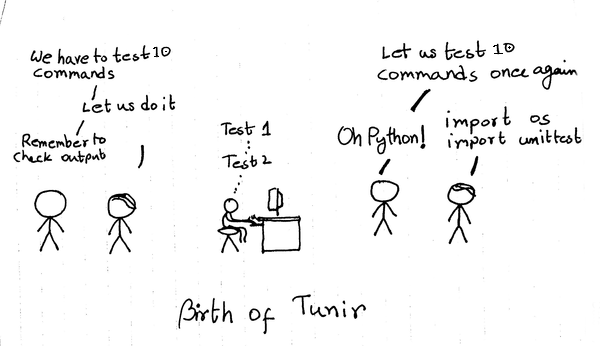 This comics explains the birth of the project Tunir. When I started working in the Fedora Cloud SIG, I volunteered myself to help with the testing of the Cloud images. We have very clear guidelines about what to test, and how to test.

Basically, you have to boot up a cloud image (or the atomic image) in a Cloud or on your local computer, run a few commands in sequence, and check the output. For the first few times it was fun to do, but slowly I found it is difficult for me. Being a super lazy programmer, I thought why not use the computer to do this job, it is not music theory :) The birth of Tunir was the result of the conversation between me and even lazier me. I just had to convert the shell commands into some Python3 based unittest cases.

At beginning it could only handle the qcow2 images of cloud base and atomic image. But while working with two week atomic change, I found out that we need do the same for Vagrant based images. It is important to remember that Fedora project generates two different kind of Vagrant boxes, one for libvirt, another one for standard Virtualbox based .box file. So Tunir got the power to execute tests on any given Vagrant image. Using these features Tunir is being consumed by the Autocloud project, where we automatically test Fedora cloud and Atomic image builds. I should not forget to mention that Tunir can also connect to a remote system, and execute the tests there. Did I mention that Tunir is doing all of these with only one JSON file containing the job description, and one text file containing the commands used for the actual tests? Tunir started as a tool for a developer, who does not want to spend time in configuration, it remains in the same way.

I wrote Tunir to test the actual OS images, but it is generic enough that it can be used to test any application. You can easily configure it to download all the dependencies of your project every time on a clean cloud/Vagrant image, and then it will build and test your application (or the full application stack along with configuration files).

Last week I have added a new weapon in Tunir's arsenal. It can now test using a given AWS AMI ID. If you run your application on AWS cloud platform, you now can use Tunir to test it there. This code is in a separate branch, but will be merged in the master this week. Following the similar style Praveen Kumar submitted a patch using which Tunir can run tests on an Openstack Cloud. We will work on it a little bit more before merging it to master branch.

You can view the tests already written for Fedora in this repository. Thanks to Trishna Guha, and Farhaan Bukhsh we now have many more test cases. I have written a document explaining how to write more tests, I have another document which explains how to debug failed tests.

What is in the future? The best way to predict your future is to create it. We have the features which we, and our users use regularly. Tunir is still simple enough for anyone to understand in less than 10 minutes. If you just want to say hi, or you are looking forward for any new feature, come to #fedora-cloud on freenode.