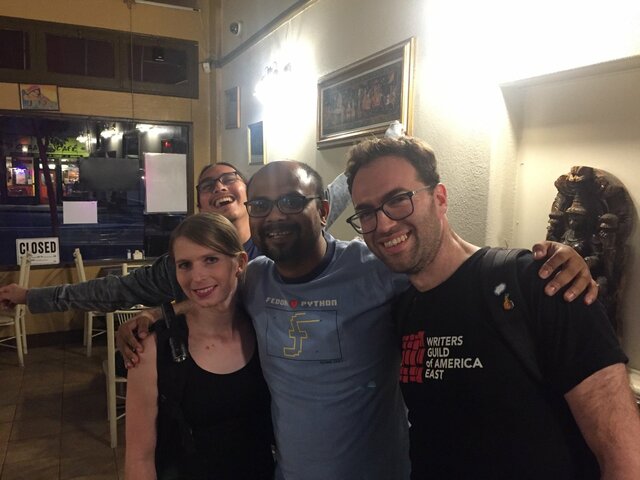 Today marks 365 days of incarceration of Chelsea Manning, with around $256000 in fines. She has not been charged for any crime.

At home, Py (daughter) wanted to know why her Wonder Woman is still in the dungeon? We had to explain Grand jury subpoena to her in simple terms and explain that her Wonder Woman aunty is resisting it, even though that means she is in a dungeon (where most good people go when they fight for truth against the big powers of the world). Py now wants to go to USA and meet Chelsea. The other day, Py also declared that after growing up she will fight for others and go to dungeon just like Chelsea.

Chelsea spoke about her believes and principles again and again, and why did she feel that leaking the war crimes to the world was her duty. By the same principles, she is standing up to the secret hearings of grand juries now. Everyone knows that there is no good reason to put her back into the prison system, but the government still did that.

believe that subjecting Chelsea to more punishment will change her mind, they are gravely mistaken.

After waking up today morning, I suddenly found she again tried to commit suicide and now recovering in the hospital. She had previously spent 7+years in prison including 11 months of solitary confinement, and these things in total causes a lot of mental health issues.

I hope for her speedy recovery and also hope someone in the US judicial system will see the injustice to her and release her soon. Meanwhile, we all can send her letters (on white paper, handwritten or drawn) to the following address:

You can also read her statement released on Aaron Swartz Day 2019.