Solid is a specification that lets people store their data securely in decentralized data stores called Pods. Pods are like secure personal web servers for your data.

We can host these Pods in personal servers or at any provider. Everything is tied up based on the user identity, called WebID. It is an HTTP URI described as RDF document.

You can decide who/what can access your data. Applications/humans can use Solid authentication and identify to the Pod server to access the data using open protocols.

How to get a Pod?

The website lists current vendors who provide Pod services. If you want to play around locally, you can run community server on your local system. Or just create an account at solidcommunity.net, and use that to learn more.

We already have a solid-file Python module. You can install it via pip in a virtual environment.

For the rest of the example code, I am going to use my Pod at the solidcommunity.net, feel free to replace the username/password and URL values in the code as required.

Here we are importing the module, creating an Auth object and identify using username and password.

Then we will check if a folder exist or not (it does not exist yet), and create the folder in this case.

Next, we create two text files.

We can then list all of the items under our subfolder.

We can then try to read one of the files we just now created.

Why am I looking at Solid?

Solid as the specification is evolving along with the community. One usecase for any government organization would be if the citizens can control the access to their own data, and people can authorize who gets to access their data. Solid can become answer to that question. The specification is loose enough to allow building things easily on top of it.

I would love to see Python as a major part of this ecosystem. The solid-file project maintainers are doing a great job. But, we need more related projects, including proper examples of various usecases. Maybe a server too. 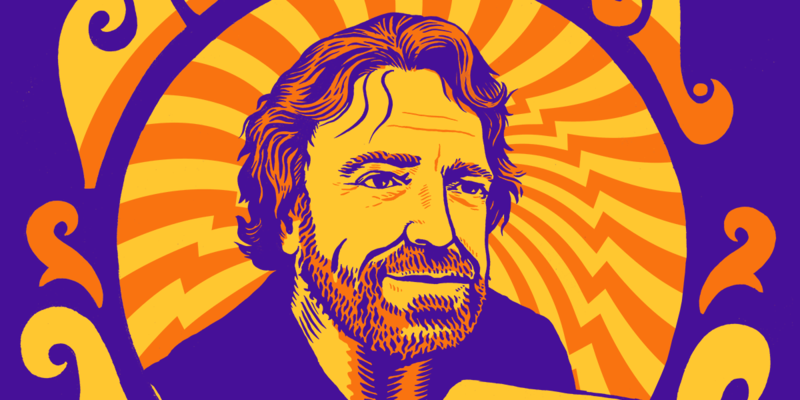 I dream of a day, and it is not a crazy dream, when everybody on this planet who wants to know all about that is presently known about something, will be able to do so regardless of where he or she is. And and I dream of a day where the right to know is understood as a natural human right, that extends to every being on the planet who is governed by anything. The right to know what it’s government is doing and how and why. -- John Perry Barlow 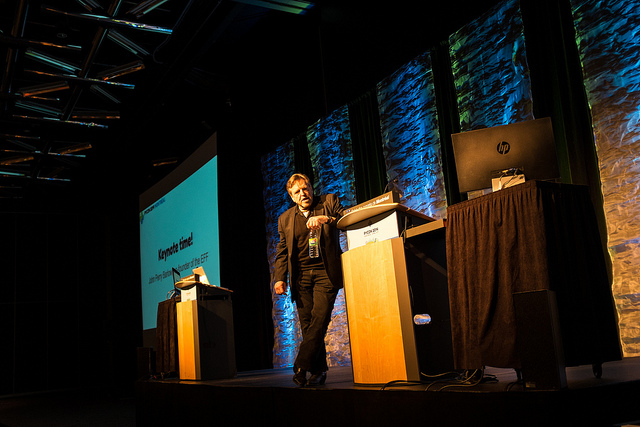 I met John Perry Barlow only once in my life, during his PyCon US 2014 keynote. I remember trying my best to stay calm as I walked towards him to start a conversation. After some time, he went up on the stage and started speaking. Even though I spoke with him very briefly, I still felt like I knew him for a long time.

This Saturday, April 7th, Electronic Frontier Foundation and Freedom of the Press Foundation organized the John Perry Barlow Symposium at the Internet Archive to celebrate the life and leadership of John Perry Barlow, or JPB as he was known to many of his friends and followers.

The event started around 2:30AM IST, and Anwesha and /me woke up at right time to attend the whole event. Farhaan and Saptak also took part in watching the event live.

Cory Doctorow was set to open the event but was late due to closing down of SFO runways (he later mentioned that he was stuck for more than 5 hours). In his stead, Cindy Cohn, Executive Director of the Electronic Frontier Foundation, started the event. There were two main panel sessions, with 4 speakers in each, and everyone spoke about how Barlow inspired them, or about Internet freedom, and took questions after. But, before those sessions began, Ana Barlow spoke about her dad, and about how many people from different geographies were connected to JPB, and how he touched so many people’s lives.

The first panel had Mitch Kapor, Pam Samuelson, Trevor Timm on the stage. Mitch started talking with JPB’s writing from 1990s and how he saw the future of Internet. He also reminded us that most of the stories JPB told us, were literally true :D. He reminded us even though EFF started as a civil liberties organization, but how Wall Street Journal characterized EFF as a hacker defense fund. Pam Samuelson spoke next starting with a quote from JPB. Pam mentioned The Economy of Ideas published in 1994 in the Wired magazine as the Barlow’s best contribution to copyrights. 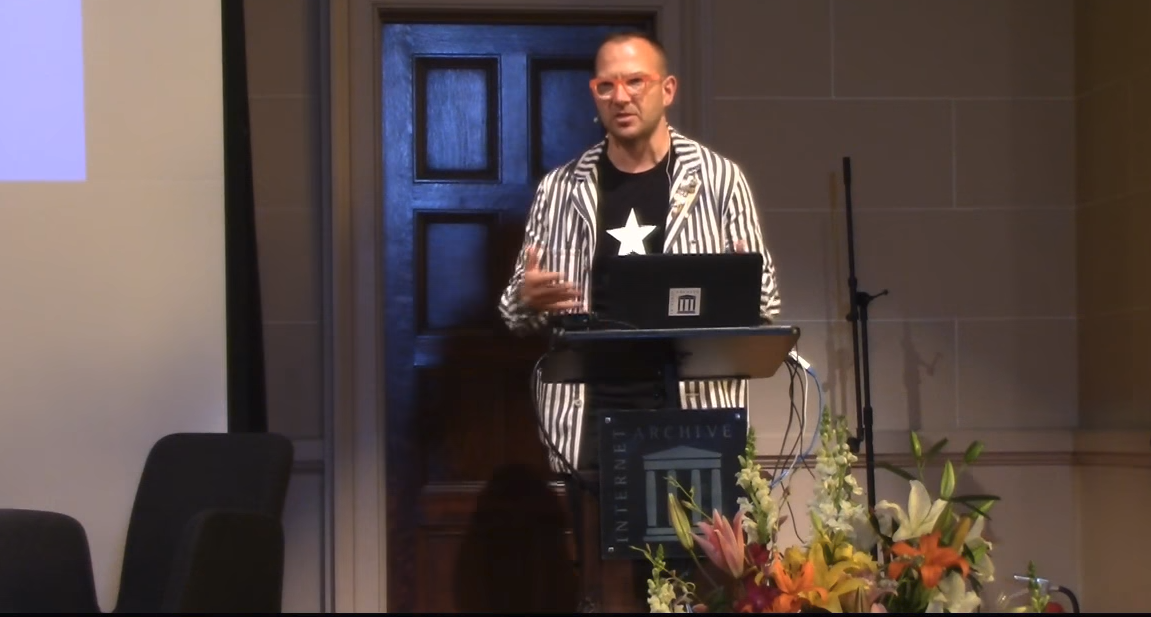 Cory Doctorow came up on stage to introduce the next speaker, Trevor Timm, the executive director of Freedom of the Press Foundation (FPF). He particularly mentioned SecureDrop project and the importance of it. I want to emphasize one quote from him.

It’s been observed that many people around the world, billions of people struggle under bad code written by callow silicon valley dude bros, those who hack up a few lines of code and then subject billions of people to it’s outcomes without any consideration of ethics. 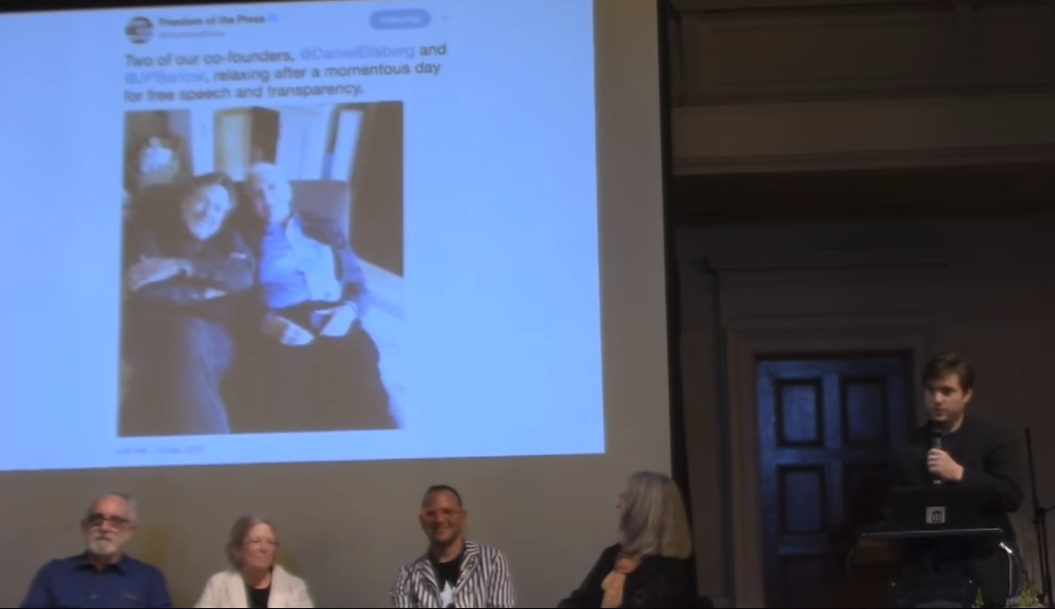 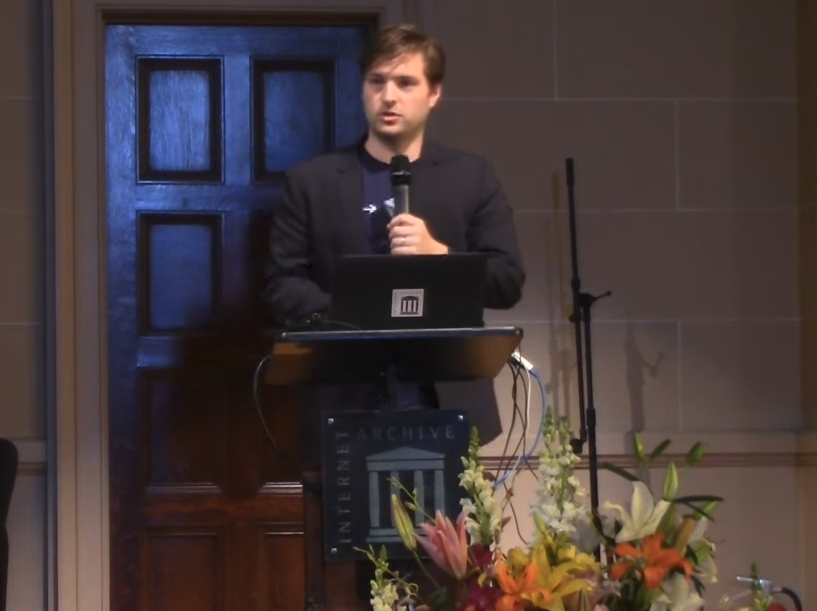 Trevor talked about the initial days of Freedom of the Press Foundation, and how JPB was the organizational powerhouse behind the organization. On the day FPF was launched, JPB and Daniel Ellsberg wrote an article for Huffingtonpost, named Crowd Funding the Right to Know.

When a government becomes invisible, it becomes unaccountable. To expose its lies, errors, and illegal acts is not treason, it is a moral responsibility. Leaks become the lifeblood of the Republic.

After few months of publishing the above mentioned article, one government employee was moved by the words, and contacted FPF board members (through Micah Lee). Later when his name become public, Barlow posted the following tweet. 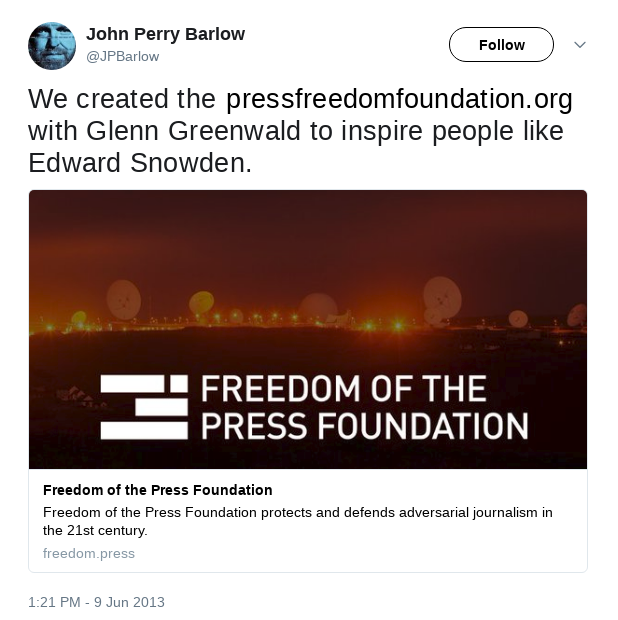 Next, Edward Snowden himself came in as the 4th speaker in the panel. He told a story which is not publicized much. He went back to his days in NSA where even though he was high school drop out, he had a high salary and very comfortable life. As he gained access to highly classified information, he realized that something was not right. 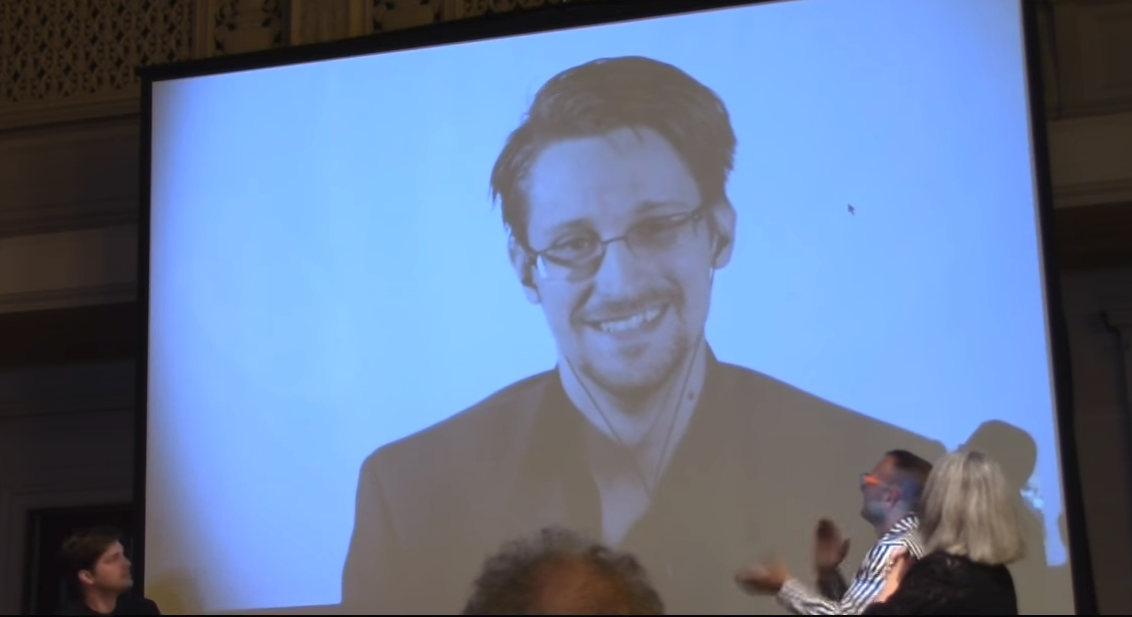 He talked about how EFF and JPB’s work gave direction of many decisions of his life. Snowden read Barlow’s A Declaration of the Independence of Cyberspace and perhaps that was the first seed of radicalization in his life. How Barlow choose people over living a very happy and easy life, shows his alliance with us, the common people of the world.

After the first panel of speakers, Cory again took the stage to talk about privacy and Internet. He spoke about why building technology which are safe for world is important in this time of the history.

After a break of few minutes, the next panel of speakers came up on the stage, the panel had Shari Steele, John Gilmore, Steven Levy, Joi Ito.

Shari was the first speaker in this group. While started talking about the initial days of joining EFF, she mentioned how even without knowing about JPB before, only one meeting converted Shari into a groupie. Describing the first big legal fight of EFF, and how JPB wrote A Declaration of the Independence of Cyberspace during that time. She chose a quote from the same:

We are creating a world where anyone, anywhere may express his or her beliefs, no matter how singular, without fear of being coerced into silence or conformity.

Later, John Gilmore pointed out a few quotes from JPB on LSD and how the American society tries to control everything. John explained why he thinks Barlow’s ideas were correct when it comes to psychedelic drugs and the effects on human brains. He mentioned how JPB cautioned us about distinguishing the data, information and the experience, in ways that are often forgotten today.

Next, Steven Levy kept skipping many different stories, choosing to focus on how amazingly Barlow decided to express his ideas. The many articles JPB wrote, helped to transform the view of web in our minds. Steven chose a quote from JPB’s biography (which will be published in June) to share with us:

If people code out for eight minutes like I did and then come back, they usually do so as a different person than the one who left. But I guess my brain doesn’t use all that much oxygen because I appeared to be the same guy, at least from the inside. For eight minutes, however, I had not just been gratefully dead, I had been plain, flat out, ordinary dead. It was then I decided the time had finally come for me to begin working on my book. Looking for a ghost writer was not really the issue. At the time, my main concern was to not be a ghost before the book itself was done.

I think Steven Levy chose the right words to describe Barlow in the last sentence of his talk:

Reading that book, makes me think that how much we are going to miss Barlow’s voice in this scary time for tech when our consensual hallucination is looking more and more like a bad trip.

Joi mentioned that Barlow not only gave a direction to us by writing the declaration of the independence of cyberspace, but, he also created different organizations to make sure that we start moving that direction.

Amelia Barlow was the last speaker of the day. She went through the 25 Principles of Adult Behavior.

The day ended with a marching order from Cory Doctorow. He asked everyone to talk more about the Internet and technologies and how they are affecting our lives. If we think that everyone can understand the problems, that will be a very false hope. Most people still don’t think much about freedom and how the people in power control our lives using the same technologies we think are amazing. Talking to more people and helping them to understand the problem is a good start to the path of having a better future. And John Perry Barlow showed us how to walk on that path with his extraordinary life and willfulness of creating special bonds with everyone around him.

I want to specially thank the Internet Archive for hosting the event and allowing the people like uswe who are in the cyberspace to actually get the feeling of being in the room with everyone else.