dgplug summer training 2018 will start at 13:30 UTC, 17th June. This will be the 11th edition. Like every year, we have modified the training based on the feedback and, of course, there will be more experiments to try and make it better.

What happened differently in 2017?

We did not manage to get all the guest sessions mentioned, but, we moved the guest sessions at the later stage of the training. This ensured that only the really interested people were attending, so there was a better chance of having an actual conversation during the sessions. As we received mostly positive feedback on that, we are going to do the same this year.

We had much more discussions among the participants in general than in previous years. Anwesha and I wrote an article about the history of the Free Software and we had a lot of discussion about the political motivation and freedom in general during the training.

We also had an amazing detailed session on Aadhaar and how it is affecting (read destroying) India, by Kiran Jonnalagadda.

Shakthi Kannan started Operation Blue Moon where he is helping individuals to get things done by managing their own sprints. All information on this project can be found in the aforementioned Github link.

We are living in an era of surveillance and the people in power are trying to hide facts from the people who are being governed. There are a number of Free Software projects which are helping the citizens of cyberspace to resist and bypass the blockades. This year we will focus on these applications and how one can start contributing to the same projects in upstream. A special focus will be given to The Tor project, both from users' and developers' point of views.

In 2017, a lot of people asked help to start learning Go. So, this year we will do a basic introduction to Go in the training. Though, Python will remain the primary choice for teaching.

How to join the training?

I am happy to announce that Trishna Guha is the recipient of a dgplug contributor grant for 2016. She is an upstream contributor in Fedora Cloud SIG, and hacks on Bodhi in her free time. Trishna started her open source journey just a year back during the dgplug summer training 2015, you can read more about her work in a previous blog post. She has also become an active member of the local Pune PyLadies chapter. 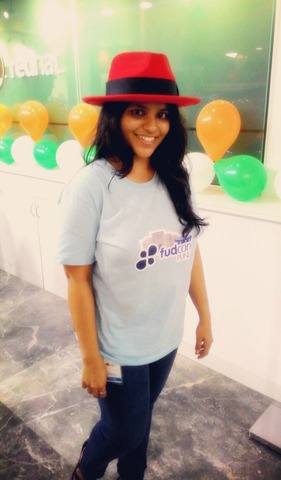 The active members of dgplug.org every year contribute funding, which we then use to help out community members as required. For example, we previously used this fund to pay accommodation costs for our women contributors during PyCon. This year we are happy to be able to assist Trishna Guha to attend PyCon India 2016. Her presence and expertise with upstream development will help diversity efforts at various levels. As she is still a college student, we found many students are interested to talk to and learn from her. So, if you are coming down to PyCon India this weekend, remember to visit the Red Hat booth, and have a chat with Trishna.

Contribution, a word a I first heard in 2004. I was a student back then. I first contribution was to the KDE l10n project with help from Ankur Bangla project. More than anything else it was fun. All the people I first met were already doing many things, they used to do more work than talking, they still do a lot more work than many people I know.

Over the last 10 years the scenario of FOSS movement in India has changed. Contributors used to be the rock stars. The people just starting always wanted to become contributors. But a new word has taken the place, evangelist. Now everyone wants to become an evangelist. Most of the students I meet during conferences come to me and introduce themselves as evangelists of either Open Source or some other FOSS project, they do only talking and all of them want to change the world. But sadly, none of them seem to want to contribute back.

I can understand, contributing is difficult in many cases. One needs some amount of preparation and some commitment to contribute to any project. That takes time, cannot be done overnight.

Try to get involved in the discussions of the project. Join the IRC channel, stay there. In the beginning you may not understand all the conversations in the channel, but keep a note of the things people are discussing. You can read about them later, use a tiny and shiny site called google.com :)

I know new students have a tendency of trying to solve non-programming bugs. But as most of you are in Engineering background, you should focus in programming more than anything else.

At home, try to find the things you do in computer in steps and repeatedly/regularly. Try to write small programs which can do those tasks for you. One of my first proper project was a small GUI application using which I used to upload photos to flickr.com, via emails.

When working on some other big project, try to solve easy bugs at first. These days all projects somehow mark easy bugs in their bug tracker. In case you can not find one, ask in the IRC channel for help. Remember that IRC is asynchronous, you may not get the answer right away. If someone is helping you, you may want to ask their timezone.

I am not saying doing work in other parts of the project is less meaningful. I personally want you to write more code than anything else. That way we will get more developers from India.

What about translation and documentation?

If you look at the people who contribute with translations or documentation, you will find few common things. Like they all love their language, they love writing. As I said before even my first contributions were translations. But neither me or any anyone else that time used to do this for some goodies or ticket to any conference. We love our mother tongue and we love to use the computer in our language, period. If you are doing translations, then do it for the love of the language and fun. Please do not do this for some stickers or release parties.

What about becoming an evangelist?

Before you start calling yourself an evangelist, you should learn about that project. You will have to spend a lot of time to learn about the technology behind, you will have to learn why some decisions were taken. The evangelist is a person who cares and believes in the project and most importantly, knows the project intimately. [S]he knows the developers behind the project, constantly talk, blog and spread the news about the project. If you look at the established evangelists, you will find mostly veterans who spent a lot of time contributing to the project first. It is not about the age of the person, but more about the time [s]he spent in the project. Btw, if you want to call yourself a developer evangelist, first become a developer of that project. That means some real code, not some examples.