Right now, we are in the QA period for the SecureDrop 1.6.0 release. SecureDrop is an open-source whistleblower submission system that media organisations and NGOs can install to securely accept documents from anonymous sources. It was originally created by the late Aaron Swartz and is now managed by Freedom of the Press Foundation.

In this blog post I am going to explain how we do the QA for the release. I hope you can suggest some ways to improve the steps and make it better.

A few properties of SecureDrop to keep in mind during QA

The test plan for each release is tracked on the wiki and linked from the release ticket. Each time, we have the following categories of test cases:

We also have a private QA matrix, where we track things for each supported hardware (for update and new install) in a spreadsheet so that it becomes easier to understand if any basic test (say if the system is booting) is failing.

Please go through the test plan and the workflow. If you have any suggestions, you toot/tweet or email me. Your input is precious to make SecureDrop a better and safer tool for whistleblowers around the world.

Next week we have the 0.5 release of SecureDrop. SecureDrop is an open-source whistleblower submission system that media organizations can use to securely accept documents from and communicate with anonymous sources. It was originally created by the late Aaron Swartz and is currently managed by Freedom of the Press Foundation.

In this blog post I am going to tell you how can you set up a production instance of SecureDrop in VM(s) in your computer, and help us to test the system for the new release.

We provision our VM(s) using Vagrant. You will also need access to a GPG key (along with the private key) to test the whole workflow. The set up is done using Ansible playbooks.

Another important piece is a Tails VM for the administrator/journalist workstation. Download the latest (Tails 3.3) ISO from their website.

You will need at least 8GB RAM in your system so that you can have the 3 VM(s) required to test the full system.

Get the source code

For our test, we will first set up a SecureDrop 0.4.4 production system, and then we will update that to the 0.5rc release.

Clone the SecureDrop repository in a directory in your local computer. And then use the following commands to set up two VM(s). One of the VM is for the application server, and the other VM is the monitor server.

In case you don’t have the right image file for KVM, you can convert the Virtualbox image following this blog post.

Follow this guide to create a virtualized Tails environment. 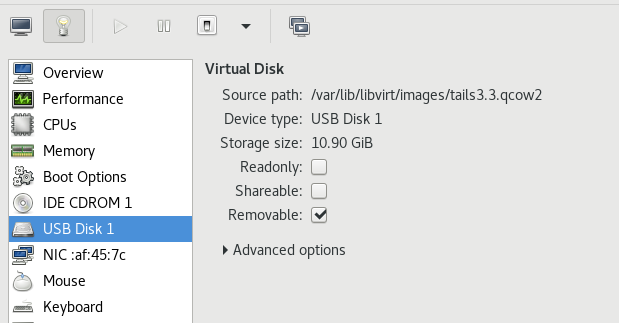 For KVM, remember to mark the drive as a removable USB storage and also mark it in the Booting Options section after the installation.

Then, you can mount the SecureDrop git repository inside the Tails VM, I used this guide for the same.

Also remember to change the Virtual Network Interface in the virt-manager to Virtual network ‘securedrop0’: NAT for the Tails VM.

For the next part of the tutorial, I am assuming that the source code is at the ~/Persistent/securedrop directory.

We will also have remove a validation role from the 0.4.4 Ansible playbook, otherwise it will fail on a Tails 3.3 system.

In the host system make sure that you export your GPG public key to a file in the SecureDrop source directory, for my example I stored it in install_files/ansible-base/kushal.pub. I also have the exported insecure key from Vagrant. You can find that key at ~/.vagrant.d/insecure_private_key in your host system. Make sure to copy that file too in the SecureDrop source directory so that we can later access it from the Tails VM.

Inside of the Tails VM, give the following command to setup the dependencies.

Next, we will use the sdconfig command to create the configuration file.

The above command will ask you many details, you can use the defaults in most cases. I am pasting my configuration file below, so that you can look at the example values I am using. The IP addresses are the default address for the production Vagrant VM(s). You should keep them the same as mine.

Use the following two commands to start the installation.

Then wait for a while for the installation to finish.

Configure the Tails VM as a admin workstation

The above command expects that the previous installation step finished without any issue. The addresses for the source and journalist interfaces can be found in the install_files/ansible-base/*ths files at this moment.

Now update the systems to the latest SecureDrop rc release

The following commands in the Tails VM will help you to update to the latest RC release.

Then we will SSH into both app and mon VM(s), and give the following the command to update to the latest RC.

Note: You can use ssh app and ssh mon to connect to the systems. You can also checkout the release/0.5 branch and rerun the tailsconfig command. That will make sure the desktop shortcuts are trusted by default.

After you update both the systems, if you reopen the source interface in the Tails VM again, you should see version mentioned as a RC release.

Now, if you open up the source interface onion address in the Tor browser on your computer, you should be able to submit documents/messages.

On December 7th from 6PM we are having a SecureDrop hackathon at the EFF office. Please RSVP and come over to start contributing to SecureDrop.

We have Fedora 25 released a few days back. Along with various editions, we also have the Atomic edition out. This release is special for few points, one of them is being the first release from the Atomic Working Group. The another major point is a release where Cloud Base image, and the Atomic image + Vagrant boxes were fully tested by Autocloud project in the whole release cycle.

Sayan did a tremendous work in redoing the Autocloud front-end, which many of us use to keep an eye on the builds. Yes, we do test our nightly builds on Autocloud. You can also keep an eye on this by using Fedora Notifications system. This automated testing was the major reason behind finding no surprises during Cloud/Atomic test day in the F25 cycle. Through the development cycle of Fedora 25 Autocloud kept finding the network related issues, or whenever the image refused to boot cleanly. Dusty Mabe, and our excellent QA team helped us to mark those issues into right bugs, and then with help from the developers, we managed to get them fixed on time. Adam Williamson also has an OpenQA setup where the ISO image gets automatically tested.

The test cases for the same are written as Python 3 unit tests. You can find them here. Feel free to come to the #fedora-cloud channel, and suggest any changes, or you can directly submit Pull Requests.

Another on-going work is related to documentation. We are trying to get all the docs here for our users. But we need more eyes on this. If you have any use case in mind, feel free to send us a patch/PR. Trishna Guha (IRC: trishnag) is another person whom you may want to talk about any queries you have.